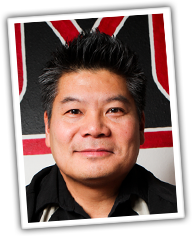 I-San started his love affair with motorcycles at the age of 16 when flipping through TV channels he came across a "super-bike" racing program and watched the motorcycles leaning in the curves doing speeds in excess of 100 mph. I-San started his racing career when he was 23 riding a ZX7 doing road racing with Colorad's Motorcycle Roadracing Association (MRA), and to this day, continues to hone his skills by taking a least one racing school skills class per year. I-San has carried this passion for motorcycle racing into his work environment by becoming Corporate Operations Officer for M1 Enterprises where he is responsible for promoting various racing venues such as the Super-Bike Nationals, Cycle Fest Super-Moto, and other American Motorcycle Association programs. I-San also works closely with Speed Channel in promoting trade shows and other motorcycle affiliated events.